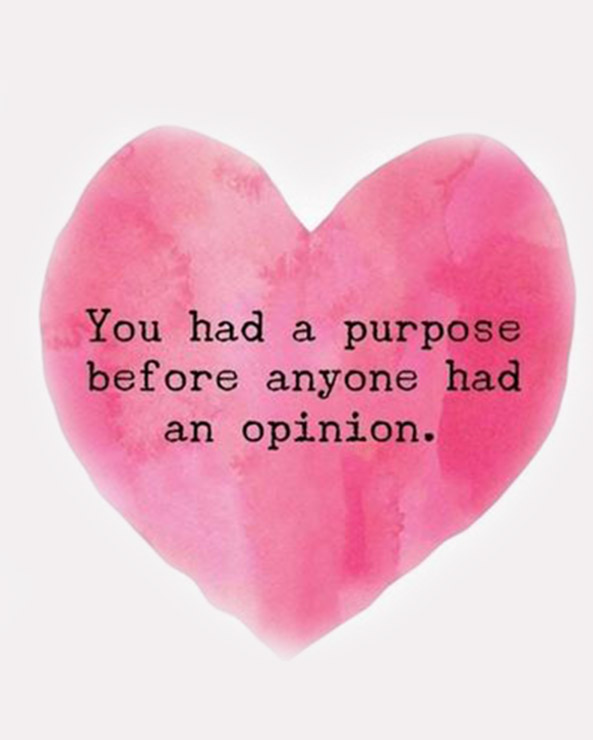 “Kuch toh log kahenge; Logo ka kaam hai kehna..” this is literally my favorite line of the song. As we grow up we see, hear and even feel tons of criticism, tons of faulty things, either about others or about ourselves.

The major mistake that we often tend to make is that we start reacting to that criticism, if not openly in public, then privately. We take the faulty things and that criticism to our hearts and we start to work, we work harder to prove ourselves, and we try to prove ourselves, to the people who criticize us, we try to tell them that we are good and that we are better than what they think of us, we try to tell them that we could do anything. We thrive to make and prove the those people wrong, who criticized us.

I’ll tell you one thing- anyone who criticizes any other fellow being for any particular thing, is himself/herself having that issue, that fault & that phase in his/her life, that he/she has been criticizing others for. And it is them who need to work and work harder to improve themselves and not you, because you are absolutely fine and you have been doing really great all this while and all these years. They have be criticizing everyone around, just so that they could avoid and ignore the faults that lay with in them, the issues that they are facing, the phases of life that they are going through and the sufferings they have been experiencing. But it is not their fault, entirely, they too are victims, they are ‘victims of victims’. They act as per what they have been seeing and experiencing for whole of their lives, and they have got it all from the people, who have been acting as per what they have seen and experienced for whole of their lives. You see it is a never ending chain.

But I feel, in the battle of other people, who are intending to grow, evolve or trying to fight their own devils and demons, it is actually not very wise to lose yourself, for them. So for you, I need you to know and to genuinely believe that you were born perfect and that you are perfect, you were born with a purpose to fulfill in life, and if you go on proving yourself to people, that are not even content with their own self, you’ll just waste your time and your life.

Just stop wearing the pressure of proving yourself to anyone because you have a different purpose to fulfill, for which you have been sent on this planet, and your reason or purpose could definitely be different from that of others. So you do not have to attend and react to what people think about you or say about you because this stops at nowhere, there is always more to prove and eventually you will forget who you actually are in this crazy process of proving yourself to other people. ❤️

Just stop for a while. Stop pushing and proving and wishing that people would see you the way, you think, you need to be seen, to succeed. Instead, let them see you for what you actually are. Once you stop proving yourself, you can be yourself !!! ❤️

Dr. Mridula Lawrence is a powerful Holistic Healer, Psychic Channel, Spiritual Coach, Brain Coach, and Life Coach. She has a vast & versatile exposure with 16+ years of Corporate Experience at Sen. Positions with MNC’s & UNDP/EU organisations followed by 8+ years in metaphysical holistic healing's. She is Corporate & Individual Trainer having vast experience in deeper Mind-Body-Soul cleansing, healing, & brain training’s. Her motto is to inspire, encourage & support fellow souls to attain their ‘soul purpose’ and shine their light in pursuit of a happier planet. Dr. Mridula Lawrence has an amazing metaphysical background, holds the title of Reverend (Rev.). She has a doctorate in science of metaphysics with counselling & conscious centered living as her forte. She has a gift of channeling High Frequency Energies from Higher realms. Being highly psychic, she can see and feel energy, can tap into all directions of time & space reality and identify exact issues faced by any person. This gives her an edge because healing's become much more accurate, faster & effective. She is trained & certified in advanced Theta Healing (Think USA), Access Bars Consciousness, Neuro-Linguistic Programming, Hypnotherapy, Quantum Jumping Techniques, Angel Therapy, Emotional Freedom Techniques, Akashic Records, Reiki, Inner Child Healing, Lama Fera, Belief Clearings, Law Of Attraction, Manifestations, High Frequency Energy Healing and more. She uses highly scientific healing procedures & vibrational therapies that transfer specific healing frequencies & vibrations into the bio-energetic fields of the recipients, making the healing’s, even for tough physical/mental/emotional ailments; easy, fast and effective. People who approach her raise their vibrations dynamically, in few days they feel they have progressed a span of ‘several years’ of work’ on spiritual front, which spills over in all other areas of life. Dr. Mridula also holds Masters in Science (Biochemistry), PG in Journalism & Mass Communication (Delhi); MBA Degree & Executive MBA from IIM – Calcutta. “Our goal is to make each one of us, inwardly aware & outwardly successful. We all are unique. Let’s spark up life, activate our uniqueness, express & share it with others. Be an ace contributor to the universe – the infinite reality that is the ultimate.” says she.

Balance Your Life by Letting Go of the Toxicity

All you need is Love: Self-Love